Artificial Intelligence: Over Half of Australians Believe That Robots Will Have More Control Over the World Than Humans by 2040 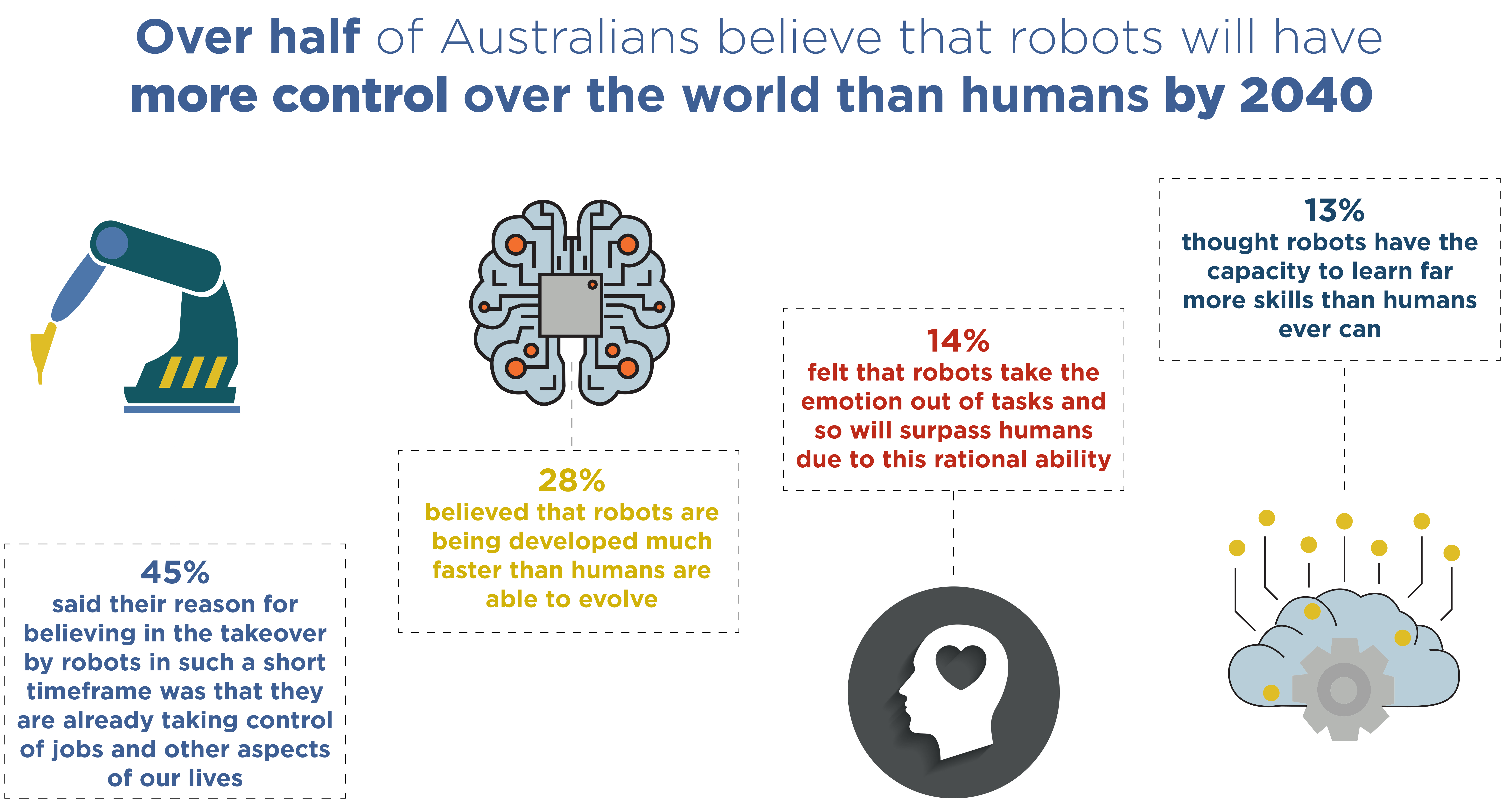 Robots taking control of the world in just 20 years’ time is a pretty crazy thought, right?

Sounds SkyNet-ish! Well, not according to new research that we conducted where 52% of Australians said that they believe that robots will have more control over the world than humans in just 20 years’ time.*

Thinque recently commissioned a large consumer foresight piece to codify market trends and Australian reactions toward roboticisation and digitisation in general. The research findings were insightful, and I can’t wait to share the results with you now and over the coming months. So don’t forget to check back in for further, revealing insights into the tasks Australians would allow robots to assist them with, their thoughts on the evolution of the Internet of Things and the skills necessary for thriving workplaces beyond the near horizon.

Back to robots taking over… Our research findings showed that of those surveyed, 45% said their reason for thinking a robotic revolution is impending was that robots are already taking control of jobs and other aspects of our lives, 28% believe that robots are being developed much faster than humans are able to evolve, 14% felt that robots take the emotion out of tasks and so will surpass humans due to this rational ability, whilst 13% thought robots have the capacity to learn far more skills than humans ever can.

The thing that worries me about this is not so much that machines are learning or artificial intelligence is getting exponentially sophisticated.

It is that us as humans sometimes suck at trend analysis and the associated change - or learning (as I like to call it) - required to thrive tomorrow. We also frequently struggle to understand the mathematics and speed involved in exponentiality. This is not science fiction ladies and gentleman. It is the mathematics of something doubling every 12-24 months. 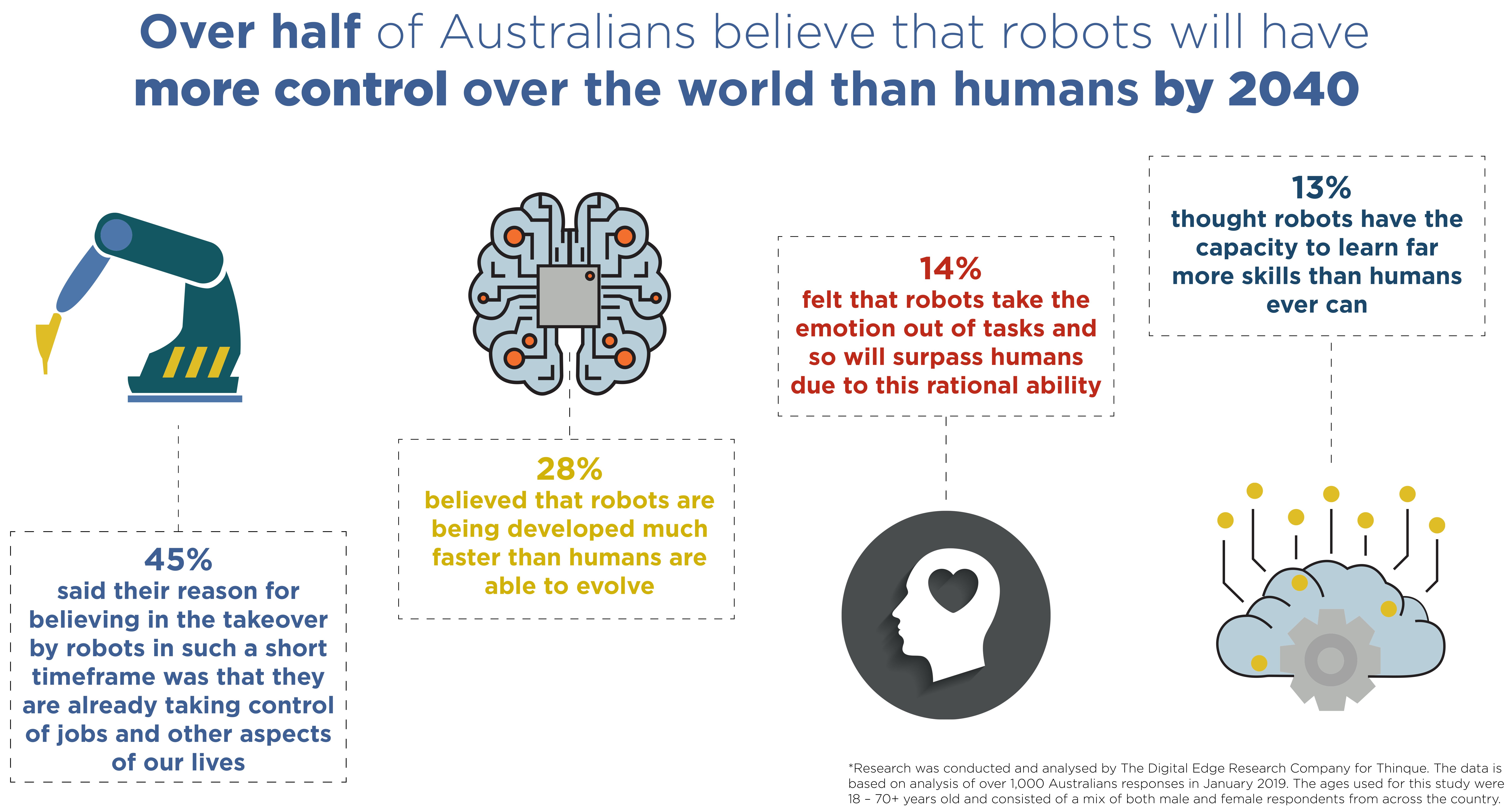 When questioned further, a significant 67% of Australians said that they were most concerned about robots becoming so advanced that they were able to mimic human capabilities, with 28% saying that they believe this is already happening today.

However, although it’s a popular view to fear robots and artificial intelligence (AI) taking over all human jobs, leaving us obsolete, I believe that in fact, the opposite can be true - but it requires our human input. The advancements in AI will mean that jobs that focus on soft skills, such as creative thinking, will be further opened up for humans to take on to an extent that has never been seen or enabled before. Why? Because in the past we had to excel at skills (left brained skills) which robots can now do better than us. The new differentiator - right brained capabilities - aren’t able to be learnt (to the same degree or as quickly as left brained skills) by robots yet and so will fall to humans to fulfil. These will trump the traditional government wisdom which places its misplaced hopes on STEM skills - skills which are being replicated exponentially. Check out my talk with ABC TV Weekend on this subject:

The research further revealed that while 54% were a little worried about robots and the future, 25% of those surveyed were actually terrified about this prospect, while 23% said it didn’t concern them at all. As humans, some terror about this is probably not a bad thing as we don’t tend to respond to new threats unless our primitive fight or flight responses are fully triggered.

Of equal concern is the fact that humans tend to think linearly when in fact these disruptive changes are going to happen much faster than humans tend to comprehend. As humans, we aren’t able to develop fast enough to combat these changes in AI and so we need to respond by training ourselves to develop and polish our fundamental human capabilities in order to survive.

We cannot keep insisting on training ourselves and our kids at skills which robots are superior at. Doing maths faster just won’t suffice!

Rather than feeling scared about an unknown future, it’s important for everyone to think like a futurist and scenario plan, to map out the potential different future alternatives that may occur.

Scenario planning is the process of creating a range of future scenarios to ensure that you, your children and your business are future-proofed for whatever tomorrow throws at you. Doing so will allow you to be, and importantly to feel prepared, as well as removing the fear associated with the future.

Our research was picked up by the leading financial news website in the country, Yahoo!7 Finance. Head here to read the full piece.

But how do you think like a futurist? Check out our scenario planning video here to find out how.

In my role as a futurist and innovation strategist, I work with some of the world’s largest global brands to facilitate scenario planning sessions to allow them to prepare themselves for the future. Get in touch to see how I can help you plan for a brighter future. 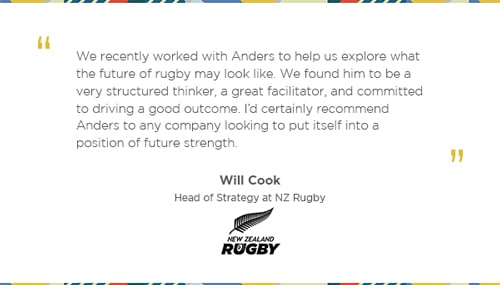