For those of you who follow this blog know that we at Thinque once in a while publish blog posts about AI, robots, self-driving cars and the automatisation so I thought I would share this news from TechCrunch: a convoy of driverless trucks has driven across Europe and recently arrived at the Port of Rotterdam in Netherlands in Europe. And according to the article self-driving trucks might impact the industry in four different ways:

As jobs within this sector will become automated truckdrivers will lose their jobs and these changes might additionally impact truck stops, motels, gas stations, diners and other businesses related to the american highway. Today in the U.S. there are around 1.6 million people working as truckdrivers so we are talking about a significant part of the American workforce here. Another result of the automatisation of jobs is that labor costs will go down and therein shipping costs will most likely also decrease.

Most truckdrivers are paid by the mile which is why there is a big incentive to drive fast and arrive at your destination as early as possible. This situation is not optimal because driving too fast is not good from a fuel efficiency standpoint, but driverless trucks can perhaps change this since they can drive almost 24 hours per day (compared to truckdrivers which are not allowed to drive more than 11 hours per day) and thus keep a better crusing speed.

Ryan Petersen, the author of the TechCrunch article, argue that further fuel efficiency gains will come as a result of the adoption of platooning technologies which is a method which aims to increase the capacity of the road by grouping vehicles into platoons. The idea is to reduce the distance between the cars or trucks by using electronic or mechanic coupling that can enable the vehicles to accelerate and break simultaneously. Peloton Technology is one of a few companies that are developing this technology.

When jobs are being automated laber costs go down which in turn increase productivity and enable lower prices for the end consumer as I've mentioned above. Petersen writes in the article that driverless trucks could double the output of the U.S. transportation network at 1/4 of the cost which needless to say would be a significant productivity gain.

One of the biggest problems that this industry is facing is the safety issue. Petersen writes that in 2016 alone more people will be killed in traffic accidents involving trucks than in all domestic airline crashes in the last 45 years combined.

Other areas where AI have been applied

Artificial Intelligence (AI) used be one of those terms that belonged in the sci-fi world, but during recent years we have seen the technology been applied in self-driving cars, driverless trucks, drones and consumer products and software like Siri and Amazon Echo. 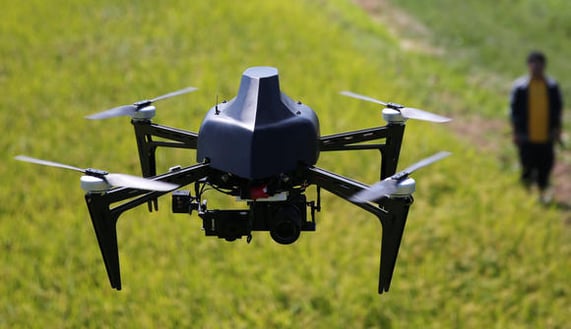 In the blog post, My Powerful Insights On The Future Of The Food Industry, I wrote about the robotisation of agriculture and the increasing sales of industrial robots. Already in Japan, 30% of all rice fields are being fertilized by drones, and we can only imagine that the role for these kind of technologies will grow exponentially within the next few years.

Sign up for our newsletter and stay updated with the latest future trends from Anders Sörman-Nilsson and Thinque.