Research Reveals: 70% of People are Worried About the Future of Work 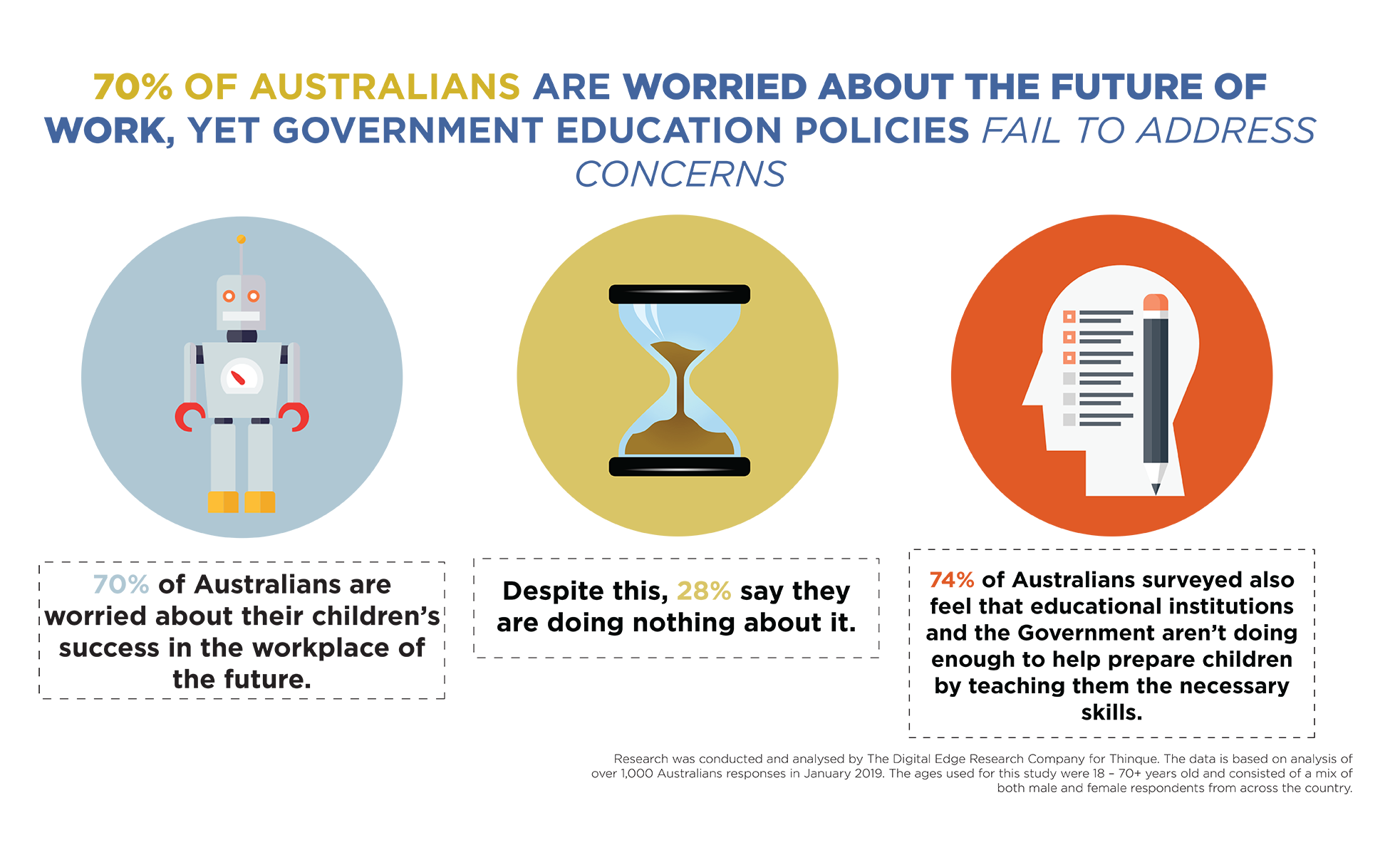 If you’ve been following our journey, you’ll know that we recently commissioned a consumer research piece which has provided you with foresight into attitudes towards a number of consumer-focused topics.

If you’ve not had the opportunity to read our research-based blogs, in the first we looked at how long Australians think it will be until robots will have more control over the world than humans and in the second we discovered how many Aussies would trust a bot to offer them financial advice.

If you have, welcome to our third installment! This piece delves into the psyches of Australian parents and how they feel that the government is letting down their children when it comes to equipping them (or not) with the skills needed for the workplace of the future. A scary thought indeed when these institutions are the ones we (at least some of us) lean on to guide us towards a better tomorrow. You may want to query your faith in ‘the government’ (if you still had any).

The research, which was commissioned by our think tank - Thinque,* revealed that 70% of Australians are worried about the future of work, with 74% stating that educational institutions and the government aren’t doing enough to help prepare children by teaching them the necessary cognitive and emotional skills for tomorrow’s careers. 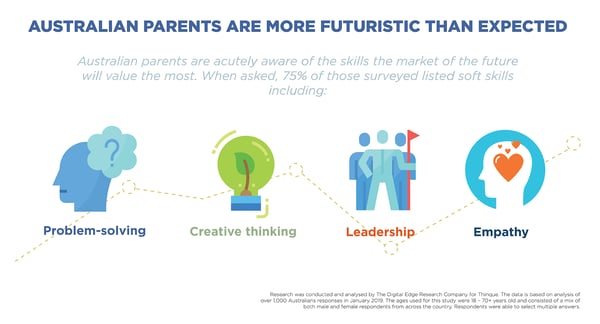 Our research has also clearly demonstrated that Australian parents are far more futuristic than we may have expected, with many being acutely aware of the skills the market of the future will value the most. When asked, 76% of those surveyed listed soft skills, including problem-solving, creative thinking and leadership, which our analyses back up.

Despite this, the major parties have completely dropped the ball when it comes to their education policies by continuing to focus on training children for the jobs of yesterday, rather than investing in innovative skills needed in the coming decades, and the jobs and entrepreneurial opportunities on the horizon.

When looking at the 2019 policies proposed by both major parties (in the lead up to the recent Aussie election), we can see that Labor pledged to deliver an extra $14 billion for public schools over the next decade**, which would go towards providing 13,000 extra teachers and 23,000 extra teacher aides. On the other hand, the Liberal party promised to provide $37 billion to schools over the next decade (to 2029)***, with this money to go towards improving teacher quality, funding apprentices in occupations with skill shortages and piloting industry-led programs. Pretty vague promises and nothing that really addressed the 4th Industrial Revolution, digitisation or the Rise of the Robots. The Liberals won the recent federal election, which unfortunately doesn’t bode well for Australian youth looking to develop their soft skills.

With neither of the major parties making any mention of training children adequately for the roles they will take on, parents need to take matters into their own hands. Worryingly, our research revealed that although Aussies are scared about the future of work, 28% stated that they are doing nothing about it!

If you don’t want to risk your children’s future, here are three key things you can do:

In order to truly prepare Australian youth, teaching must evolve to allow children to learn key soft skills such as increased creativity, entrepreneurship, problem-solving and emotional intelligence– all human abilities that AI is much slower at picking up in comparison to its ability to crunch numbers, analyse patterns, and follow logic. Otherwise, we are educating our kids for jobs that robots and computers will trounce humans at.

In order to inspire change, companies, education systems and governments must update policies to encourage the development of future proof skills. In my role as a futurist, I work with organisations to design and champion this kind of transformation through Scenario Planning, offering a fundamental re-think of what work will look like beyond the horizon, something governments would be wise to do in any country looking to them for future solutions.